My good friends Eliza and Jennifer celebrate their birthday a week apart. Coincidentally, both went on vacations for their birthdays this year so I told them their cakes would be delivered upon their return. I decided to make cupcakes instead of cakes and determined that chocolate and raspberries would be the main ingredients. Since they are both reducing their gluten intake, these flourless chocolate cupcakes seemed to be the perfect choice.

I love this recipe and have been making it for years. Originally from Martha Stewart, I have made minor tweaks by substituting coconut sugar for the white sugar originally called for and adding a bit of vanilla and cinnamon for added flavor. Otherwise this is her recipe, ingredients and directions. Rich, chocolaty and, because it is flourless, rich, dense and light at the same time.


I love pairing dark chocolate with fresh, in-season raspberries. Macerating the raspberries in Chambord liqueur takes it to another level. This is the perfect dessert to pack for a summer picnic, a day at the beach, a potluck or special birthday. Happy Birthday my friends!

Preheat oven to 275 degrees. Line standard muffin tins with paper liners. Melt butter and chocolate in a large heatproof bowl set over (not in) a pan of simmering water. Add vanilla and cinnamon. Stir to combine, then remove bowl from heat and let cool slightly. Whisk in egg yolks.

With an electric mixer on medium speed, whisk egg whites until soft peaks form. Gradually add coconut sugar, beating until peaks are stiff and glossy but not dry (do not overbeat). Whisk one quarter of the beaten egg whites into chocolate mixture to lighten; gently fold mixture into remaining whites.

Divide batter evenly among lined cups, filling each three-quarters full. Bake, rotating tins halfway through, until cupcakes are just set in centers, about 25 minutes. Transfer tins to wire racks to cool completely before removing cupcakes (their centers will sink). Cupcakes are best eaten the same day they are baked.

Combine raspberries and Chambord in small bowl. Allow to sit at least 1 hour. (up to 24 hours refrigerated) Serve alongside cupcakes. 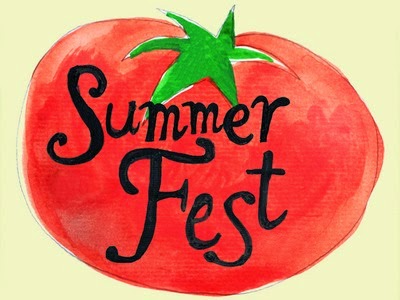 It is "Packable Desserts" week at Food Network's Summer
Soiree roundup. Check out the other delicious sounding recipes from my blogger friends. Have a favorite summer dessert recipe?  Share in the comments section and/or link to your blog if you have one.

I have started sharing my Taos experiences on my newest blog "California Girl in Taos". Please visit and let me know what you think.
Posted by Napa Farmhouse 1885 at 9:55 AM