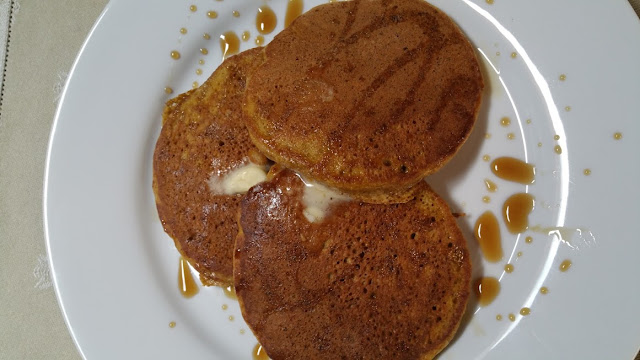 I make these pancakes every year on the first weekend of October. Pumpkin and spice just scream fall to me. The recipe originated in Bon Appetit Magazine in the November 2000 edition as part of a "Flavors of the World" article. I cannot believe it was fifteen years ago. Wow. Some of my favorite pumpkin recipes were listed in the piece. In fact, over my Red or Green? blog I posted a pumpkin-chocolate chip loaf recipe that I also love. 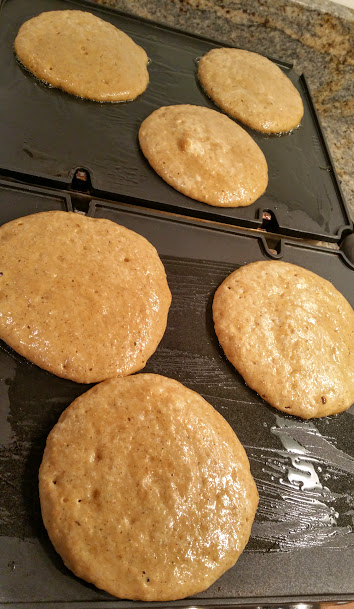 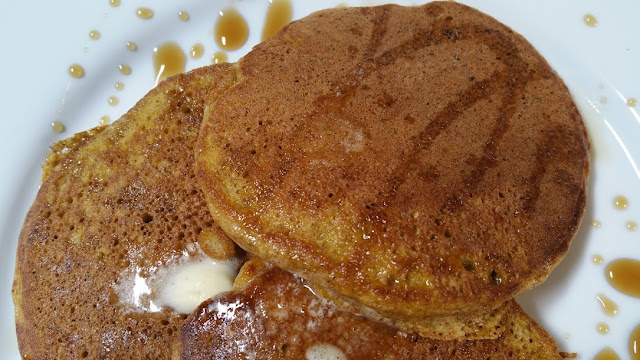 Through the years, I have tweaked the pancakes for health and taste reasons. I substituted white whole wheat flour for some of the white, used coconut sugar instead of regular, coconut milk replaced cow and extra virgin olive oil in place of butter. Oh...and, a bit of maple syrup, sounded better than vanilla. The genius of this recipe is the addition of whipped egg whites folded into the batter at the last moment. These are probably the lightest and fluffiest pancakes I have ever eaten. Give them a try...you will be making them all fall (and all winter). 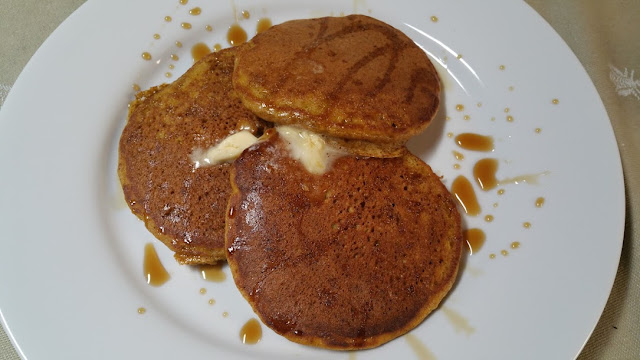 Whisk flours, coconut sugar, baking powder, cinnamon, allspice and salt in a large bowl. Stir together coconut milk, pumpkin, egg yolks, olive oil and syrup in a medium bowl until smooth. Make a well in the center of the dry ingredients and pour the wet ingredients into the well. Whisk together until just combined.

Pour egg whites into the bowl of a stand mixer and, using the wire whip (whisk) attachment, beat the egg whites until stiff, but not dry. Carefully fold 1/2 the whites into the pancake batter until just incorporated. Fold in the remaining whites.

Heat a large, nonstick skillet or griddle to medium-high. Brush with olive oil. Pour batter into a large liquid measuring pitcher (or other pitcher). Pour about 1/3 cup pancake batter per pancake onto the hot griddle or large skillet. Cook until bubbles form and tops of pancakes look a bit dry. Flip and cook until the second side is golden brown. (about 1 1/2 minute more). Repeat steps with remaining batter, brushing skillet/griddle with oil between batches. Serve immediately with butter and maple syrup.

It is Pumpkin week at Food Network's Fall Fest roundup. Do you have a favorite pumpkin recipe to share? Please list (or link) in the comments below. And be sure to check out the other delicious sounding recipes from my blogger friends and Food Network.

I have started sharing my newest blog "California Girl in Taos."  Please visit and let me know what you think.
Posted by Napa Farmhouse 1885 at 8:11 AM