The last time we were in Italy Peter had a pork chop dish that he still raves about.  Grilled chops covered with a slow cooked medley of sweet and hot peppers, onions & garlic served over hot buttered noodles. The vegetables were incredibly fresh...just-picked taste, the pork was as natural as possible and the bit of heat from the chiles added the perfect finish.
I have attempted to recreate this dish with a few twists.  I pan cook the chops most of the time (although grilling is wonderful too) and I use sweet red bell peppers and jalapeno to substitute for the Italian ones.  I also add eggplant because I like the "meatiness" this vegetable adds to the sauce.  Perfect for a weeknight dinner...elegant enough for company.
Mangiare e Divertirsi!  (eat and enjoy!) 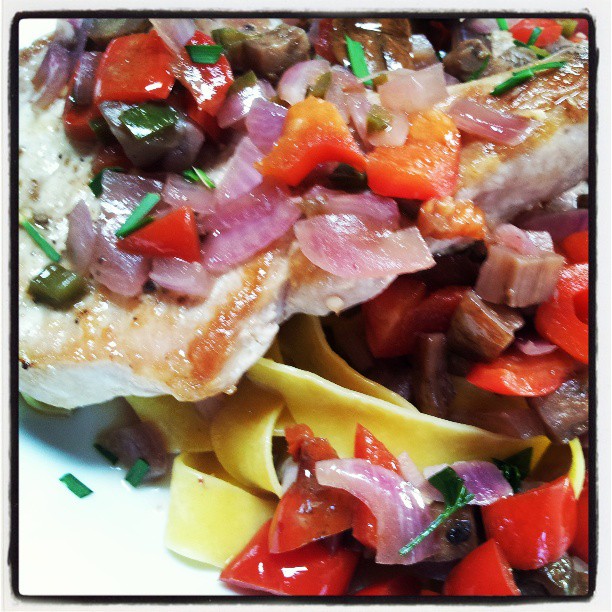 Season chops with salt and pepper on both sides.  Heat large skillet over medium high heat until hot.  Add 2 tbsp olive oil and chops to pan.  Cook pork for 3 minutes on each side.  Pork should be golden brown. Remove from heat, place on a rimmed plate (like a pie plate) and loosely cover with foil.  Set aside.

Add onion, bell pepper, eggplant and jalapeno to skillet with 1 tbsp olive oil and large pinch each salt and pepper.  Saute vegetable over medium heat for 7 minutes.  Vegetables should be just beginning to caramelize. Add garlic and saute another minute.  Add chicken broth and wine, raise heat to medium high and bring to a boil.  Boil for 5-7 minutes, stirring occasionally, until liquid has almost evaporated.  Add  parsley, butter and 1 tbsp olive oil to pan and stir to combine.  Taste and adjust seasonings if needed.  Place pork chops on top of vegetables (including any meat juices in plate), lower heat to simmer and allow chops to warm while preparing noodles.

Meanwhile, bring large pot of water to boil.  (This can be started while vegetables are cooking). Place a handful of salt in the boiling water and add noodles.  Cook according to package directions. Divide pasta between 4 dinner plates.  Top each plate with a chop, a spoonful or two of the vegetable mixture and top with chives.  Serve immediately.
Click Here for Printer Friendly Recipe 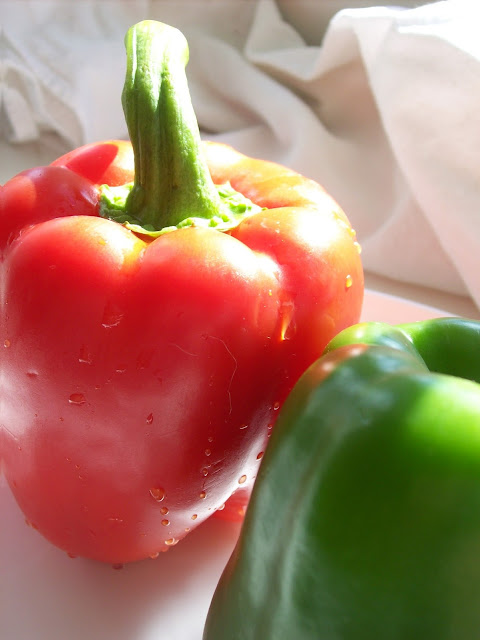 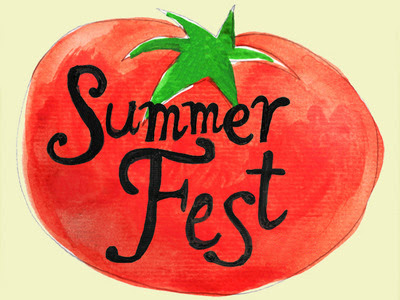 it is "peppers" week at food network's summerfest. check out the other delicious sounding recipes from my blogger friends.  have a favorite peppers recipe of your own? please share in the comments section of this post:

i have started sharing my taos experiences on my newest blog"california girl in taos". please visit and let me know what you think.
Posted by Napa Farmhouse 1885 at 1:22 PM

I can't wait to try this! Looks delicious.